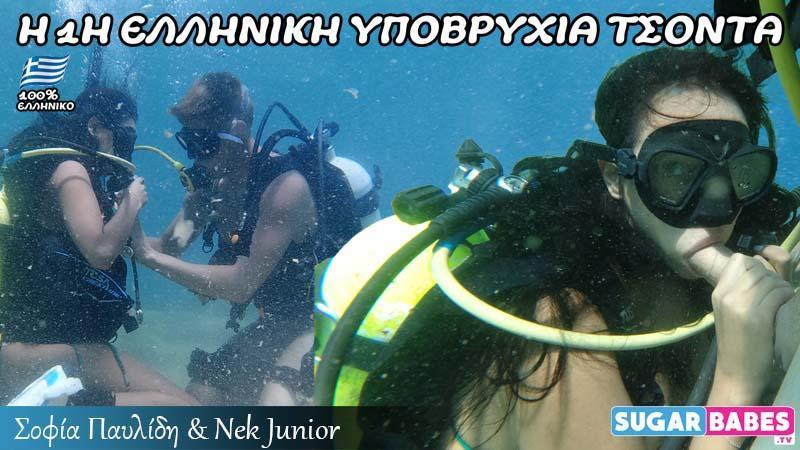 7 VIDEOS
The 1st Greek underwater choda!
Starring:
Sofias Pavlidis and Nek Junior
DESCRIPTION:
The first Greek underwater tsoda in the history of the domestic adult industry of our country is a fact! the SugarBabes.tv is once again pioneering by taking several steps forward! The protagonists of the films, the new blood star of the sugarbabes.tv who were selected after casting are Sofia Pavlidi and Nek Junior, who went through special diving training, as well as the whole crew of technicians who filmed the film. The production took place in the beautiful waters of the Aegean Sea at a depth of 20 meters below sea level, under very specific conditions so that the rendering of image quality reaches perfection.
As far as the plot of the film entitled “The 1st Greek underwater choda!” is concerned, it is as follows: The cunt Sophia Pavlidi plays a wealthy girl who enjoys her holidays on her boat with her father. Enjoying the sun while sunbathing at the bow of the boat shouts the muzzle named Anthony, where he is played by Neek Junior and commands him to put sunscreen all over her body, Neek Junior suggests that she take off her swimsuit so as not to smear it with sunscreen. After he puts sunscreen all over her body even in her as commanded by the moutsos, he starts saying flattering words to her, that she has a wonderful body, while she cuts the air to him, telling him to stop saying the obvious and do what she tells him! Besides, as she tells him, you pay to carry out her wishes alone. The moutsos submissively performs all the wants of the protagonist. While she’s putting on sunscreen, she tells him that he’s been horny and that she’s wanted to undress and fuck her. But her father is also on the boat, something that the moutsos reminds her that if he takes them a gander, they will both have an impact, but she insists that she has to do whatever she likes. So Neek Junior goes to undress in front of her on the boat, while she tells him that her father is asleep. Then he proposes to her to take a dive and a submarine to take a pipe, something that she receives, which she receives, actually super-horned by the Psolaras moutsos. After they are prepared with the appropriate equipment for the dive, the moutsos you give her the appropriate instructions, how to suck his dick underwater. After diving into the blue waters and making their dive with amazing shots under the surface of the sea, begins a highly caustic erotic game of the two protagonists underwater. The fucking submarine begins with a super caustic patch in the water. While the moutsos has burned at the end, they undress on the seabed while Sofia Pavlidi sucks his kayli, a snack that surpasses our imagination proving the talent in sex even underwater of the young protagonist that SugarBabes highlighted! The pictures you will see, the tick and the fucking that is done are the only ones! Neek Junior after the snack he offers him starts a highly horny game on her hot body and thus begins a unique underwater fucking in many stops. He really undresses her with scenes uniquely without precedent with all that you’ve seen in a choda, making him give her his spills, something the hot protagonist of the film really wanted. Until underwater lick you will see in this unique production! Only on Sugarbabes tv !
(Visited 86454 times, 1 visits today)
Greek Porngreek pornoNek JuniorSofia PavlidisugarbabesSugarbabes.tvtsodatsontaγαμισιαελληνικες τσοντεςελληνικο πορνομουναραπορνο ελληνικοΣοφία Παυλίδητσοντεςυποβρύχια ταινία